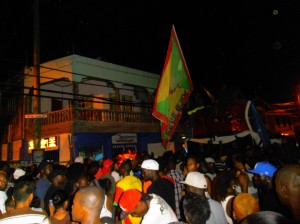 Grenadian born and bred Kirani James made history for himself and his country on Monday August 6th 2012 at the Olympic games in London by becoming the first athlete ever from the beautiful Spice Isle to win an Olympic Medal – it was not just an ordinary medal, it was pure gold! He made his golden mark into history when he coasted to victory in the men’s 400 meters in a time of 49.94 seconds, the fastest time in the world this year in that event. He has also run the fastest 400 ever by any Caribbean sprinter.

Because of his athletic prowess, Grenadians have nicknamed him “Jaguar.” And like the true champion that he has emerged, he has done not only himself and his family proud but also his country. When asked by the sportscaster who interviewed him on Monday after his stellar performance what he thought might be happening in his country after his historic win, Kirani said, “It’s probably crazy home right now, there is probably a huge party in the streets. I don’t think there is any words that can describe the celebration right now.”

Kirani’s words were prophetic! They have come to pass! Today August 7th 2012, Grenadians took to the streets in jubilation, particularly in James’ hometown of Gouyave, St. John to celebrate their champion. Prime Minister Tillman Thomas described James’ winning as a “historic performance” and declared a public half holiday. To Kirani James, the Prime Minister says these words, “You, Sir, have taken Grenada to the world and we thank you and honor you. We love you. All of Grenada celebrates your spectacular performance.”
Empowerment Moments (EMoments) join in congratulating 19 year old Kirani (Jaguar) James on this momentous occasion. You have brought to our memory the words of the Apostle Paul which says, “I can do all things through Christ which strengtheneth me.” (Philippians 4:13) Never give up on your dreams. If you fail at the first try, then try again. A winner never quits and a quitter never win.
source: spiceislander

2 Comments on Making A Golden Mark Into History