As a young child growing up, one of the things that I learned and which remains with me until today is, do not look back! Not only was it bad luck I was told, but clinging to things of the past, especially negative, painful and hurtful things, result in unnecessary weight and baggage that sets you back in life.

So now in my adult life, and through searching the scriptures, I also understand that to adhere to the things of the past, whether bad or good, is to set oneself up to be reckoned as an unspeakable loser, losing not only that which one may have garnered [good things], but losing the most important aspect of one’s life which is Jesus Christ our Lord.

Holding on to the negative [bad things] on the other hand, is likened to cancer that slowly eats away on the inside. It cuts through the core of your heart and soul until it kills you.

What others have said

Make it a rule of life never to regret and never look back. Regret is an appalling waste of energy; you can’t build on it; it’s only for wallowing in. ~ Katherine Mansfield

I consulted an experienced scholar in the person of the Apostle Paul. He knowingly made a choice to quit looking back on his impressive stock and masterful accolades, which in and of themselves was sufficient to make a case for his justification not to have suffered the things like he did, or to lose which he had in those very instances.

Must read: Out With The Sticky Residues Of Your Past

The Apostle spoke of his

Yet he says, “Yea doubtless, and I count all things but loss for the excellency of the knowledge of Christ Jesus my Lord….and do count them but dung, that I may win Christ.” (Phil 3:8) The Apostle here proposes himself for an example of trusting in Christ only and not anything else.

He even suggested if any man could boast of their accomplishment, he had even more reason to do so, yet would not for the better which he was awaiting to gain that was far more precious and valuable than anything else he would lose.

Repeating the past prevents you from building on it ~ Dan Rockwell

What do you repeatedly do or say? Who are you becoming? These are very important questions that you must begin to ask yourself starting right now.

These are also very popular sayings that we become what we repeatedly do and you keep on doing the same thing you’ve always done and you will keep on getting the same results you have always gotten.

Imagine holding filth or dung in your heart and mind for however many years, whether through un-forgiveness, pain, disappointment, and break-up in your relationship [name more here….] These are the cancer causing agents that are slowly eating away at the core of your being. Your healing begins when you let them go and you begin to apply to the word of God for healing of your soul.
2.  Holding on to the past prevents you from realizing your future hopes and dreams
Constantly harping on the past failures does nothing more than set up road blocks and hindrances to door of opportunity for success that is waiting to open up in your life. You hold on to past success is inertia in itself because it not only prevents you from building on it, but it blinds your vision to the future plans and possibilities that you are mostly capable of.

3.  You are taken hostage and you become a prisoner to your past

There is no freedom when you are imprisoned and your space is very limited! Just imagine waking up each day and the real person on the inside of you is held in captivity not able to smile, laugh, to explore life or to even explore who he/she is and is capable of becoming. This person is blinded by darkness and lives in obscurity with little or no light being able to penetrate the soul. Light is life. Light is love. 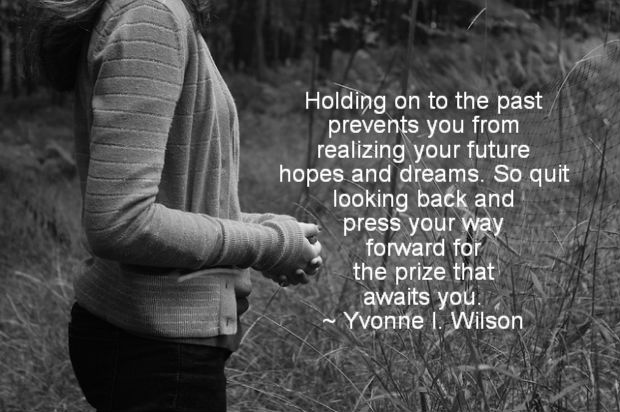 4.  Blaming others for everything and not taking responsibility for anything

Holding to the past in many instances where it is really negative, is playing the blame game over and over again – blaming everyone else rather than taking ownership and responsibility for the role that you played in your situation being the way that it is.

5.  Being hard and mean to yourself

Being mean to yourself is not just about holding on to negative emotions, it also engaging in behaviors that are harmful and dangerous to your emotional and physical health. It produces toxins in the body that brings about actual sickness and diseases. There is also a negative spin off into relationships that can be hurtful to others around you.

God wants the best for you

“Brethren, I count not myself to have apprehended: but this one thing I do, forgetting those things which are behind, and reaching forth unto those things, which are before. I press toward the mark for the prize of the high calling of God in Christ Jesus.” (Philippians 3:13-14)

Paul’s resume’ was impressive indeed! But he tells us what it was that he reached after: it was the knowledge of Christ Jesus, not an experimental acquaintance but a believing experiential relationship with Christ as his Lord. It was not a speculative but a practical knowledge of Him.

He quit his privileges as a Jew and a Pharisee by not looking back on them as anything that would add value to his present or future life but would allow his expression to rise with a holy triumph that Christ is all, in all and above all that anyone would ever need.

Let us therefore quit looking back and press our way forward for the prize that awaits us in Christ. Forgive yourself! Forgive others! Indeed, your future awaits you!

6 Comments on Warning! Holding On To The Past ,The One Thing Slowly Killing You