Keep me as the apple of your eye; hide me in the shadow of your wings. ~ Psalm 17:8 NIV

Have you heard this phrase before and understand fully what it means? In case your answer is yes and yes, for the benefit of those who have answered no and would need the understanding, I entreat you to bear with me as I explore the topic.

Personally, I have included this psalm of David in my prayers on a number of occasions in the past, but beyond that, never took the time to get to the depth of what it means to be the apple of God’s eyes.

I must tell you though, the times I made the prayer and supplication, it was in the middle of my spiritual battles, my trials and testing.

Not only did it make me feel good or rather better, I felt special and more powerful knowing that while I was under divine covering and protection, I was untouchable by the enemy.

Still the question remain, what does the scripture mean to us? In my research I came across some other verses that made reference to the phrase, ‘the apple of your eye.’

Psalm 17, like all the other chapters were penned by David. He was a man after God’s heart, but was also a man of great sorrow and pain, being constantly compassed about by his enemies who sought his life.

I can imagine David’s prayers as he cried out to God to be preserved and protected and that God would keep him with as much care as a man keeps the apple [pupil] of his eye that nature itself has ‘walled’ and ‘fenced’ in the bone socket.

Those who put themselves under God’s protection and trust Him to preserve us safely to His heavenly kingdom, can be assured of the benefits of our prayers and requests.

Likewise, with as much tenderness as a hen would keep her baby chickens from harm, from danger and gathers them under her wings, we too can go forward with the hope of God’s glorious grace of protection.

In Deuteronomy 32:10, we have yet another witness in the person of Moses as he speaks of how God cared for Jacob. He says, “He found him in a dessert land, and in the howling waste of a wilderness; He encircled him, cared for him, He guarded him as the pupil of  His eye.” ~ Deuteronomy 32:10

This is just so amazing and it makes sense to our understanding that God’s love for us is so deep, so wide, incomprehensible and above all, unconditional that wherever He has to go to find us, He will go there to encircle us with His grace, mercy, kindness, loving care and would guard us not as an apple, but like the pupil of the eye that in the natural is under such heavy protection.

We are the center of God’s eye or the central and focal point of His vision. 🙂

Still not convinced about what it means for you to be called the apple of God’s eyes? 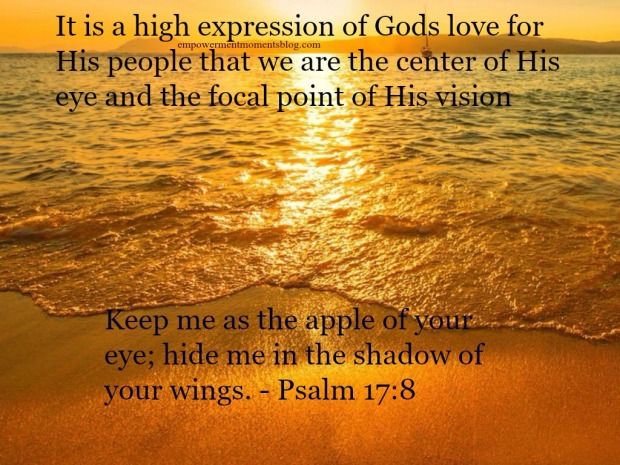 In Zechariah 2:8-9 it is written, ‘For thus says the Lord of hosts, “After glory he has sent me against the nations which plunder you, for he who touches you, touches the apple of His eye. v9 I will surely raise my hand against them so that their slaves will plunder them. Then you will know that the Lord Almighty has sent me.

It was a discouragement to those who remained in Babylon to hear of the difficulties and opposition their brethren met with in return to their land of nativity, and the danger they were still exposed to of being crushed and overpowered by their enemies.

However, as one commentary related to verse 8 said, “You are so dear to God, that He can no more allow your enemies to hurt you, than a man can endure to be thrust in the eye.’ Furthermore, Christ Himself will reckon with all them that are your enemies and will beyond a shadow of a doubt make them his footstool. [for your sake] ~ Psalm 110:1

How else can we be assured of living peacefully and with God as our defense and refuge?

Keep my commandments and live, And my teaching as the apple of your eye. ~ Proverbs 7:2

God’s expectations of us also is that when we keep his commandments and His law as the apple of our eye, we may expect that God would so keep us, protect us, defend us, demonstrate His faithfulness towards us, for YES, we are the apple of God’s eye!

This is a high expression of God’s love for His church and for His people. It is the evidence of His tender care and affection, “He that touches you, touches the apple of His eye.”

It is my prayer that you gained a deeper insight, understanding and love for the Lord like I have today.

About Yvonne I. Wilson (790 Articles)