Jabez was a descendant of Judah, one of the twelve sons of Jacob. Judah was also the forefather of King David and Jesus Christ. The meaning of Jabez is sorrow. His mother gave him this name because she gave birth to him in pain. (1 Chronicles 4:9-10)

A name is crucial to a person because it paved their destiny. God had to change a few peoples’ name to transport them into their purpose. He changed Jacob’s name which means ‘supplanter’ to Israel which means ‘God contended.’

Then God appeared to Jacob again, when he came from Padan Aram, and blessed him. And God said to him, “Your name is Jacob; your name shall not be called Jacob anymore, but Israel shall be your name.” So He called his name Israel. Also, God said to him: “I am God Almighty. Be fruitful and multiply; a nation and a company of nations shall proceed from you, and kings shall come from your body. (Genesis 35:9-11)

The Lord also changed Abram and Saria’s name to Abraham and Sarah to confirm His covenant with them. Kings and princes would descend from their loins, they would be parents of many nations, and they would be a blessing to others (Genesis 17:1-18).

Thus it was important that parents give their children suitable names at birth. Unfortunately, Jabez mother was in great pain when she bore him, and she selfishly labeled her baby according to how she felt at that time. Every mother has to labor in pain to give birth because this was the consequences of sin. A sinful body can only produce new life in sorrow (Genesis 3:16).

Irrespective of this, mothers generally do not blame their children for their agony during childbirth because after delivery the pain disappear and they receive the blessings of a beautiful, healthy child to nourish and care. But Jabez mother did not see things this way and placed a curse on her son through his name.

The Bible also tells the story of another mother who did the same thing as Jabez’s mom. Rachel, the second wife of Jacob, became pregnant with her second child. When it was time to give birth she had a difficult delivery because she died in childbirth. As she was dying, she named her son Ben-Oni which means son of my sorrow (Genesis 35:16-22).

However, Rachael’s husband, despite the love he had for her, refused to allow his son to be tagged with a curse and immediately changed his name to Benjamin which means son of my right hand.

Earlier God had changed Jacob’s name to Israel  – a name that would make him a mighty man and father of a great nation. He knew first hand the consequences of being saddled with a name that brought only negativity, deception, and problems.

Jacob demonstrated his priestly anointing as a father to his children and head of his household. He ensured that their beginning was intact.

Thus, Jabez was burdened for many years with a name that kept him in bondage. In spite of the fact that he was more honorable that all his brothers, he was constantly reminded of his ability to cause pain, and he wanted to put an end to it.

Therefore, Jabez prayed a simple but effective prayer to God. This prayer reminds us that we do not have to pray long winding prayers to God. The Lord knows our heart, and He looks for sincerity and truth. When He sees this, He immediately answers our prayers. 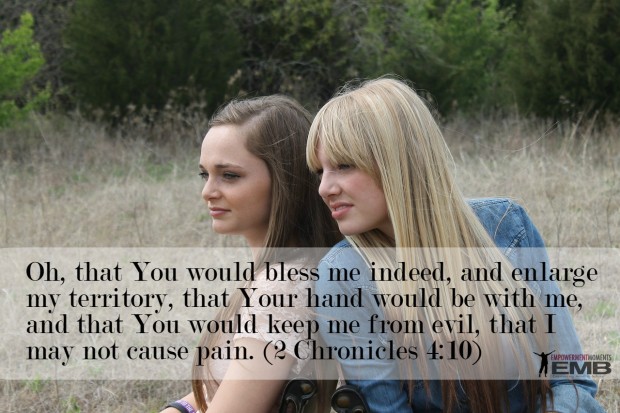 Oh, that You would bless me indeed, and enlarge my territory, that Your hand would be with me, and that You would keep me from evil, that I may not cause pain! (1 Chronicles 4:10)

How many people will dare to ask the Lord to put His hand on them? Do you want the Lord’s hand to be on you when you are outside the will of the Lord plotting evil against your brother or practicing iniquity? (Psalms 32:4)

If you are on the opposite side of God, His hand will be mighty against you to destroy every evil intent of your heart. If you are honorable like Jabez and live an upright life, the Lord’s hand will be upon you as a mighty conquering Lion to destroy and rebuke the enemy for your sake (Psalms 17:7; Psalms 44:2; Psalms 91:7-12).

Are you sure that you want God’s hand upon your life?

Finally, Jabez asked the Lord to keep him from evil so that he did not cause pain. Jabez knew that he was capable of harming or hurting others, and he wanted the curse to be removed from his life. So he humbly asked the Lord to keep him away from evil. Indeed, Jesus’ guide to our daily prayer is that we asked our heavenly Father to lead us away from temptation and evil (Matthew 6:8-13).

We also need to pray for God’s guidance every single hour of the day because it is so easy for us to slip and fall into sin. We are vulnerable to the enemy’s attack and a slight mistake on our part will give him leverage to attack us. The Lord is always warning us of the enemy’s threat but many times we fail to heed the warning until it is too late.

May God give us the grace to be sensitive to the voice of God and to be obedient to His word and to heed His warning. Jabez prayer is simple and easy to memorize so that we can continually repeat it over our life and family.

Similar To Jabez, the Lord will see the honesty of our hearts and grant us our request.

Beverley has been serving the Lord since she was a child. At an early age, she recognized that God had a special plan for her life, but it was not until in her adulthood that she surrendered her total life to God and accepted the mandate that God placed on her life. The Lord called her into His Kingdom to be an encourager, intercessor, teacher, scribe, priest, and to proclaim the Word of God. Since then, Beverly has established a blog to teach us to become the oil and wine. The oil and wine are purified and mature products, which is the advanced level that the Lord expected of us. In 2017, Beverley published her first book, Harm Not The Oil And Wine. In it, she described her trials and how God helped her to overcome them, and to live more victoriously. The book also exposed the enemy of our souls with detailed information about his past defeats and future extinction. Wright spents most of her time studying the Bible to know the truth of God’s Word. She believes that only God’s truth can expose the deception of the enemy, and uproot and tear down spiritual strongholds. You can learn more about Beverley’s life and testimony on her website becomingtheoilandwine.com. You can also find her on Facebook and Google+ under the name of her blog, and on Twitter as @Theoilandwine.

3 Comments on One Simple Prayer That Can Change Your Destiny